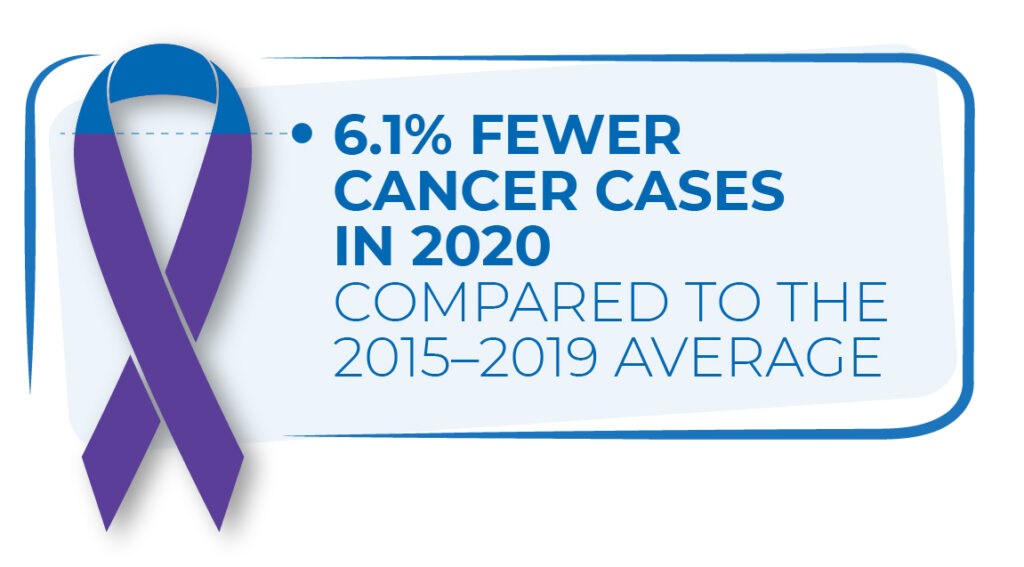 One way to determine how much progress is being made in the fight against cancer is to examine trends in cancer diagnosis (incidence) and cancer deaths (mortality). During the initial waves of the COVID-19 pandemic, the month-to-month trends in cancer diagnoses changed abruptly, making it difficult to accurately identify patterns and get a true sense of cancer’s impact on people in Canada. Looking back on the data from 2020 now confirms what many experts predicted at the time: a dramatic decrease in the number of newly diagnosed cases of cancers.

The power of data

Why a decrease in diagnoses is not necessarily a good thing

Under normal circumstances, the number of new cancer cases will increase by about 3% each year due to population growth and aging. That did not happen during the first year of the pandemic. Overall, the number of registered cancer cases for 2020 decreased by 6.1% compared to the annual average for 2015–2019.1 This is largely because many health-care services were delayed or suspended in the months following March 2020, including cancer screening, leading to delayed cancer diagnoses and, in turn, a decrease in total case numbers. But that doesn’t mean cancer rates were decreasing or that fewer people were getting cancer — just that fewer people were having their cancers detected and diagnosed.

While screening service disruptions were the primary contributor to the decrease in new diagnoses, other factors were at play as well. These included difficulties accessing primary care services and fewer in-person appointments due to lockdowns and travel restrictions, leading to fewer biopsies performed to explore suspicious symptoms.

The underestimation of new cancer cases in 2020 can be broken down as follows:

As screening services were reinstated and people once again sought care for potential cancer signs and symptoms, diagnoses eventually increased as the year went on. By December 2020, the number of cases was 2% higher than the 2015–2019 average for that same month. That said, it is important to note that the cancer system did not “catch up” on the diagnoses that were missed earlier in the year — leading to a growing backlog of undiagnosed cases that may take years to address.

Looking at the four most commonly diagnosed cancers, in April 2020, there were:

While most of these cancers eventually rose to their expected monthly case counts by December 2020, lung cancer incidence remained lower than expected throughout the entire year. (This reflects not only the impacts of the COVID-19 pandemic but also the ongoing decline in lung cancer incidence seen since the mid-2010s.)

PERCENT CHANGE IN NUMBER OF CANCER CASES BY MONTH, 2020 VS. 2015-2019 AVERAGE, FOUR MOST COMMONLY DIAGNOSED CANCERS

When screening services were disrupted due to the pandemic, many screenable cancers were not being detected at their usual rates. In May 2020, the number of newly diagnosed cases for the three cancers that have population-based screening programs available (breast, colorectal, cervical) was down 39% versus the 2015–2019 average. In comparison, diagnosed cases of “non-screening” cancers (those that do not have population-based screening available) decreased by 26%.

The re-opening of screening services resulted in a continued increase in diagnoses as the year went on, with a slightly higher than expected number of new cases in September, leading to a smaller discrepancy in case counts between screening and non-screening cancers by the end of the year.

PERCENT CHANGE IN NUMBER OF CANCER CASES BY MONTH, 2020 VS. 2015-2019 AVERAGE, SCREENING AND NON-SCREENING CANCERS

More timely data are needed to determine the full impact

Although a decline in newly diagnosed cancer cases was seen between the months of March and August 2020, by the end of that year, lung cancer was the only commonly diagnosed cancer whose case numbers remained below their expected counts. Canada is not alone in this regard: reductions in cancer pathology reporting and new cancer diagnoses following the introduction of public health measures in 2020 were reported in several countries.2,3,4,5

Yet while monthly case counts returned to their expected numbers, the cancer system is still working to catch up on the backlog of “missing” cases that were not diagnosed during the first wave of the pandemic. In addition, the magnitude of the impact of the subsequent waves of the pandemic on provincial cancer systems remains unknown, largely because that information has yet to be collected.

To that end, Canada needs to make greater investments in cancer data collection and collation tools and resources — along with investments in people with the expertise to analyze and interpret that data. Because only with a more detailed assessment of the extent of delayed diagnosis by cancer type, age and province/territory will we be able to fully address the treatment and follow-up needs of cancer patients diagnosed in the first year of the pandemic.

The incidence and mortality data featured in this section of the report was provided by members of the COVID-19 Cancer Task Force, a sub-committee of the Data Use and Publications Committee (DUPC) including representatives from cancer registries across the country.